On Thursday night my mum and I were in the city for dinner and popped into this popup we found on Hardware Lane. By day it’s usually a Roll’d store, the well-known Vietnamese street food franchise and by night it transforms into a pop up restaurant called Mama’s Buoi. Turns out, Mama’s Buoi is made by the same people who created Roll’d (Ahh it all makes sense). The menu is still authentic Vietnamese food but the style is more of a dine-in restaurant version. The prices are still pretty cheap though and the food is just delicious.

It’s was nice inside the décor was modern. There was a big table in the center of the room with contemporary Asian inspired vases with beautiful flowers. You can see my mama under the sign engrossed in the menu options haha. There is also an outdoor eating space with heaters.

They had a range of drinks on the menu including a list of alchoholic beverages. They were also trialling different cocktails each night so maybe ask them what cocktails they have available.

We ordered the crispy whole flounder, which was crispy on the outside and perfectly soft in the middle. The fish effortlessly fell away from the bone. It was cooked perfectly. It had ginger, chilli and caramelised onions with a limey Vietnamese dressing. It was delicious! 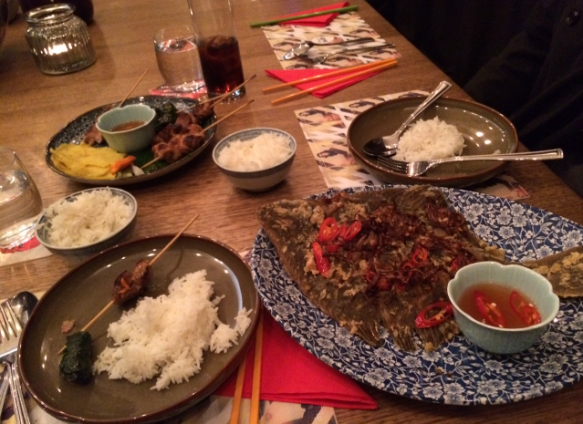 We also got the small share gril, which was a share plate with a variety of skewers. There was pork, chicken and sausages wrapped in betel leaf. They came with crepes, pickled vegetables and Nuoc Cham sauce. They were really yummy, the pork one was my fave.

All the food was really tasty. I really wanted to get the coconut mussels, crispy fried prawns, the beef vermicelli salad and the sautéed water spinach but I was already so full. Just means I’ll have to go back. The pop up is there until the 4th of August but don’t worry, they will soon be opening the actual restaurant at GPO. Did I mention that the staff were really lovely? Well they were. Definitely worth popping by.

The dumplings look like little teepee huts residing in a steam basket. These delicate delights are soo tasty they change the whole dumpling heirachy. They make your favourite dumplings taste average and your average dumplings taste less than average.

They have a variety of dumplings available on the menu, but the ones you want are the “Shao-long Bao”, which apparently means little dragon in chinese and boy are those little dragons delicious! These soup dumplings are pork so if you dont eat pork i suggest you prentend its something else and just try them…because they really are super!

There is a particular way the dumplings like to be eaten so if you follow these five steps you will experience the dumplings at thier potential best.

Step one: grab the top of the dumpling with chopsticks
Step two: dunk the dumpling into vinegar
Step three: break the outer and sip the soup
Step four: eat the rest of the dumpling
Step five: smile and nod your head in recognition of its greatness

A quality dumpling is hard to find but when you do, it consumes you unexpectedly, and every dumpling you ever loved becomes insignificant for this dumpling walks effortlessly with you on your journey. Now that is a dumpling well worth waiting for.