Here at Olive Sundays there have been a few changes behind the scenes and we are pleased to show you our new website.

So to continue your subscription with Olive Sundays you will need to follow us again on the new website where we will be writing heaps of mouth watering content for you all in the future.

Follow this link to go to the new site www.olivesundays.com

Thanks for your support! 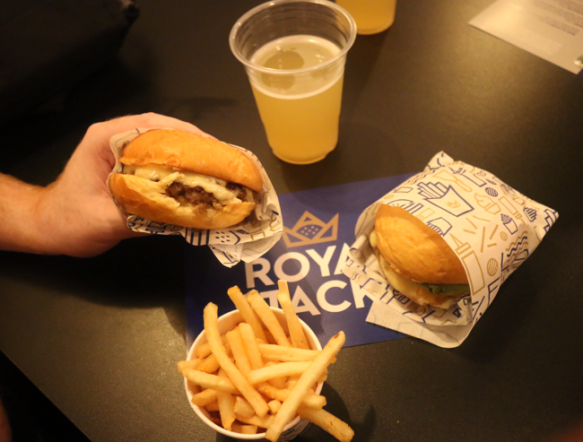 Royal stacks is a new burger joint in town that opened today. If anyone in Melbourne is an expert on creating a burger it’s Dani Zeini, who has proven his burgery genius through restaurants like Dandenong Pavillion, Grand Trailer Park Taverna, Truck Stop Deluxe and Easey’s. The beef in all the burgers is sourced locally and the patties are minced fresh daily. Even the buns are baked fresh with no preservatives added. These little details are what make these burgers so tasty.

Inside it has an American diner style atmosphere.

When you’re trying a new burger place for the first time, I feel the classic single stack gives you a good indication of the quality of burger you’re dealing with. This one had an all Australian beef patty, tomato, butter lettuce, American cheddar, special burger sauce and pickles. The meat was juicy, the salad was fresh, the bun was soft the special sauce went well and the cheese oh the cheese. It was delicious.

The bacon bacon was mammoth, it was one gigantic burger with double beef patties, double bacon, American cheddar, caramalised onions, American mustard, tomato sauce and pickles. This one is not for the faint hearted. 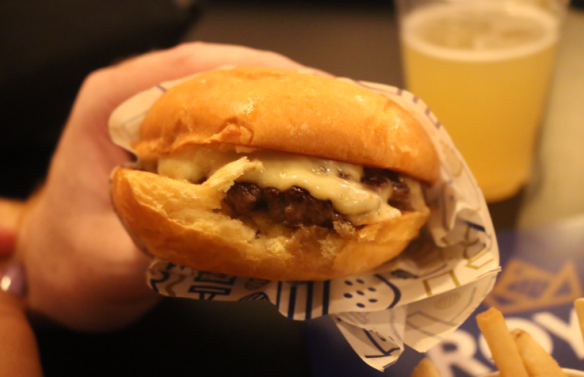 Miss Elizabeth is elegant and gets right down to business, no unnecessary vegies allowed. It’s a beef patty with swiss cheese and truffle mayo. A little bit fancy and a whole lot of delicious. 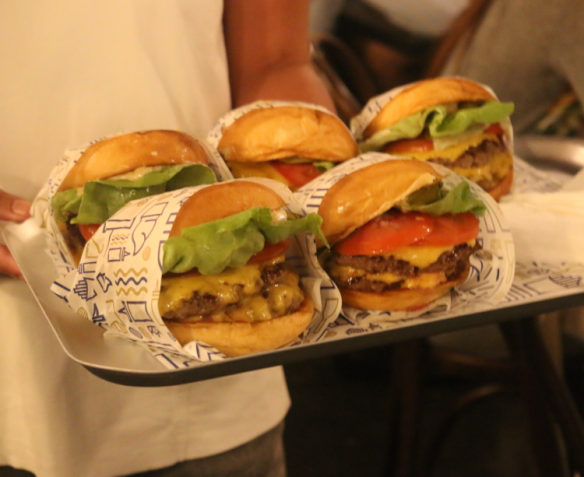 The Saint burger is the spicy one. It has a spicy chipotle mayo and jalepenos. So it’s definitely for those who like it hot.

They also have the Queen Bee, which has a chickpea patty so vegetarians can enjoy a tasty burger too. And for sides they have shoestring fries and potato gems. 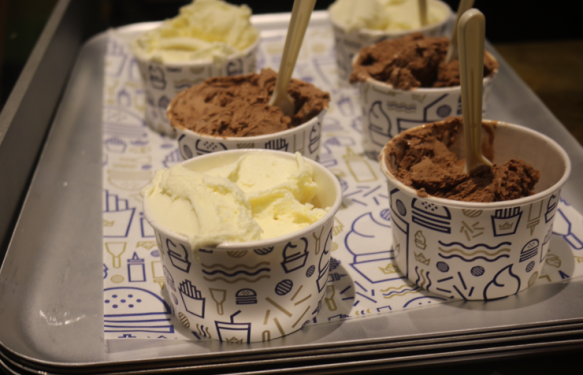 For dessert 7 apples make a frozen custard which was similar to gelato but a little bit sweeter. The chocolate and vanilla were my fave.

As you walk in there is a royal blue throne with a royal stacks crown. And so naturally…this happened.

Royal stacks is now open so you can pop by on your lunch break, after work or on the weekend for some tasty burgers and beverages in the city.

Kwan’s table is a Thai inspired café and patisserie that recently opened on Inkerman Street in St Kilda.You can visit Kwans for a savoury meal and stay for the sweets, which is what we did on this fine morning. They do modern Thai inspired meals like soft-shell crab in a brioche burger and deep-fried pork belly with an apple salad. Their desserts are inspired by French technique but incorporate Thai flavours like lychee, coconut, pandan and kaya. They only opened about 6 weeks ago but are already making a good impression around town.

It’s a cute little cafe. And the staff are lovely.

The pandan custard toast was insanely delicious. One mouthful and I was in love. The super thick toast was lathered in a warm smooth creamy pandan wonderland of deliciousness. A generous amount of custard was spread over the toast with toasted coconut sprinkled on top and was cut into bite size squares so it was easy to eat. Loved it. They also have a kaya (coconut jam) custard toast for those who love kaya.

The pork belly salad was lovely and fresh. The pork belly pieces were lightly battered and deep fried. The fresh salad had red cabbage, carrot, lettuce, spinach, slithers of apple, coriander and chopped peanuts in a sweet tangy dressing., which was just what I needed on this warm summer day.

We tried the oh-so-cheesy chilli cheese soldiers which was thick toast soldiers with cheese in the middle and cheese on top. It also had sliced red chilli, red onion and coriander scattered over the top. A tasty snack. 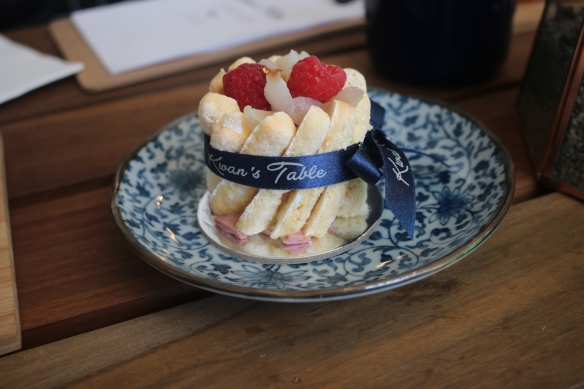 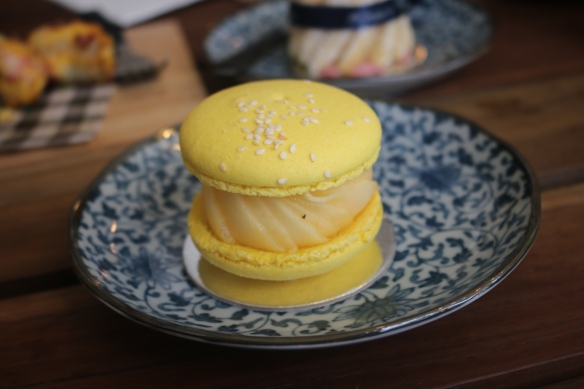 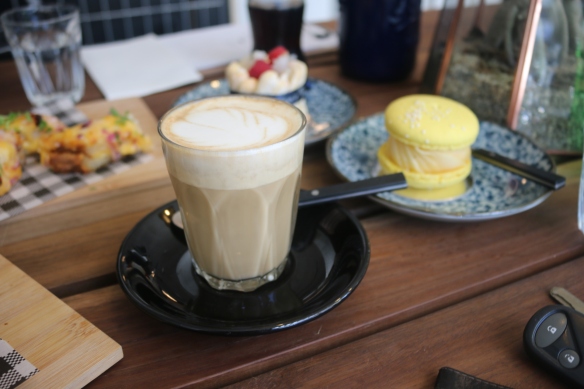 And to top off a great brunch date, the coffee was awesome too. They use 5 senses and had bonsoy yay! And also I know I already mentioned this but the pandan toast was bom! I can foresee myself making regular stops to Kwan’s for coffee and pandan toast. In conclusion you need to mosey on down to Kwan’s table for a modern Thai adventure.

Kitty Burns is a new brunch café that recently opened in Abbotsford. The menu provokes excitement and the food presentation is on point. Overlooking the yarra they have an open outdoor area, which is perfect for summer days. 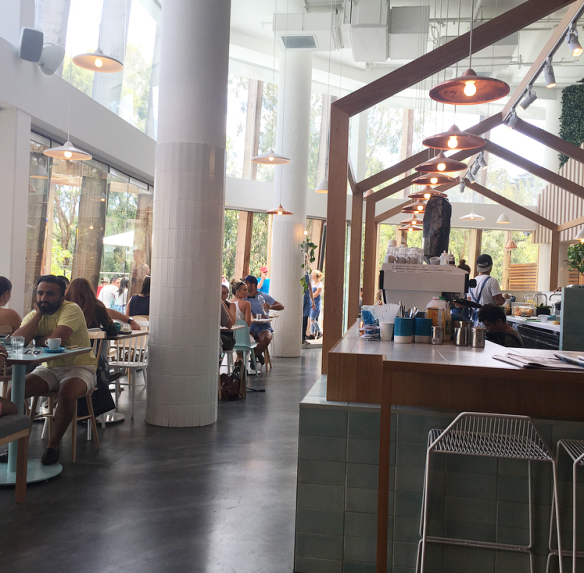 The venue has an open space with lots of natural light which gives you positive feels and the greenery and wooden pointed arches give it a modern look. Some drinks to start, iced latte and iced chocolate.

The pea and garden mint panna cotta is a creative concept. A closed glass jar was presented aside a piece of toast. As I opened the jar, a waft of smokey woodchips drifted out and reveled a beautiful edible garden. There was a silky green panna cotta in the bottom, layered with bacon crumb, potato popcorn, house smoked salmon, a 62 degree egg, pea shoots and edible flowers. The flavour of the panna cotta was light and refreshing and matched perfectly with the crunchy bread. Then the oozy egg yolk, the oily salmon, the salty finely crumbed bacon, and the crunchy potato pops. The flavours and textures all complimented each other. It was delish.

I also couldn’t refrain from ordering a mac and cheese croquette on the side.

The KB was tasty. It was shaved free-range pork belly with green mango and papaya slaw and umami mayo in a brioche bun. It had a side of house made pickles and a piece of crunchy chicheron (puffed pork crackle) on top. 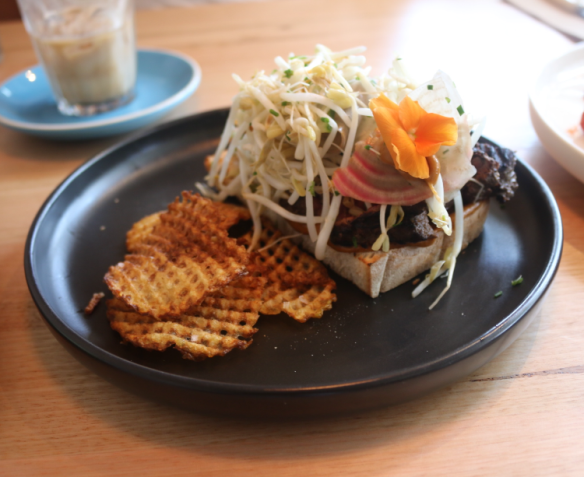 The hanger steak was an open steak sandwich on sourdough. Edible flowers can make even a steak sandwich look pretty. The meat was lovely, you could choose how the meat was cooked (medium) and the outside of the meat had a strong charcoal smokey flavour. It was served with caramelised shitake ketchup, which was aweome and complimented the meat well. Then there was chargrilled cucumber, bean sprouts and coriander. It came with waffle potato crisps, which were crunchy and looked great. We had the French toast for something sweet. It was a thick piece of bread with a thin layer of sweet eggy deliciousness. It was paired with an interesting range of flavours. The whipped maple syrup added a sweet creaminess, the spots of coffee ganache added richness, the quince added tartness and the compressed poached peaches added a lovely summer flavour.

Kitty Burns is an exciting new brunch spot with an innovative menu and an inspiring atmosphere. Perfect for summer brunches! Dex2rose is a new nitrogen gelato place that recently opened in the city, down racing club lane (off little burke st). They have a team of creative people making some really interesting gelato flavours. They use only the finest ingredients and seasonal produce so you will find the menu usually changes every three weeks. In addition to great gelato they also do a tasty cold brew coffee, nitro brew (nitrogen charged) coffee and have bottles of cold pressed juice made in-house daily.

They have a nice open space where you can hang out and enjoy your gelato. Rain or shine, gelato is always a good idea. 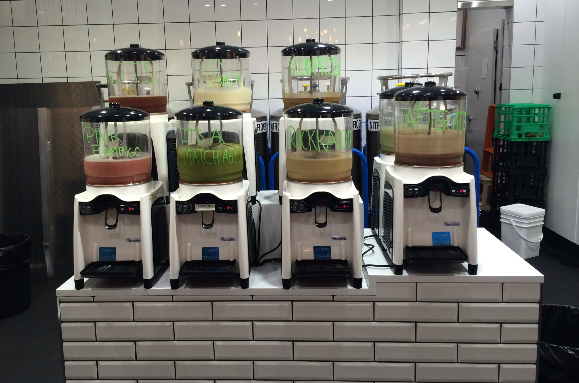 This is the pre gelato mix churning away patiently waiting to evolve into real gelato.

To start I had a pot of nitro brew, which is cold brew coffee on tap charged with nitrogen. So awesome! It was really refreshing and surprisingly sweet. The nitro brew I had was infused with maple and brown sugar but they will be changing the flavours of the nitro brew every so often. They have an apple cinnamon one coming up soon. Yum! It had the appearance of a dark larger with a foamy beer head. It felt like I was drinking an ice-cold beer but it was actually coffee. Genius!

The ‘lazy dinner’ gelato sounded intriguing from the get go. Sage, burnt butter and caramel gelato, topped with sticky caramel sauce. It was a winner. The sage and burnt butter makes you feel like there is a savoury component (I think it’s the herbiness from the sage) and then the caramel offers the sweet component. The savoury and sweet gave a good balance of flavours and worked gloriously together. It was an odd combo but the flavours worked well. Not hard to see why it’s a crowd favourite.

Then I had the ‘pink flamingo’, which was a peach and rose Moscato sorbet with rosewater coconut cream. This one was refreshing and had more of an icey texture (it being a sorbet and all) but it still had an intense flavour. I personally prefer the creamy gelato more but a sorbet would definitely go down a treat on a scorching hot day. This particular sorbet was vegan, gluten free and non-dairy. And with Dex2rose’s ever-changing menu they always have at least 2 flavours that are GF, non-dairy and vegan friendly. They kindly cater for all gelato lovers.

The ‘After Ate’ was milk chocolate gelato infused with peppermint oil. The gelato was chocolate and mint combined which was nice. I feel like I usually have mint gelato with choc chips so it was a nice change. Through the gelato there were crunchy chocolate brownie chunks and then it was topped with a vertical spiral or fresh vanilla cream.

The honey stash was the star of the day for me. It was pistachio and honey gelato with honeyed nut clusters and raspberry cream. It was incredible! The gelato was full of flavour, it had an intense creamy pistachio and honey flavour that was absolutely divine.

Then it had a generous amount of surprise honey nut clusters scattered throughout the gelato which were delish and added good crunch. And then, it was topped with a fresh raspberry cream, which added an aerated texture and a subtle tartness. It was sensational.

They also make their own in-house cold pressed juice that they make daily. I had the strawberry, white grape and granny smith apple juice. It was tart, sweet and crisp. Yum!

Dex2rose is an exciting new gelato store, which exudes creativity, innovation and imagination. The experimental flavours and fresh ideas from the team at Dex2rose are sure to keep you returning for more. The staff are absolutely lovely and make you feel right at home and the gelato speaks for itself. It’s a great place to chill with some good friends and some great gelato.

Note: Olive Sundays was invited as a guest to Dex2rose.