Pushing the boundaries and taking risks would be an understatement when it comes to brunching at Mammoth. With a lobster doughnut burger on the menu aside egg and bacon popcorn, it is definitely a place that will leave you amazed and inspired. This café in Armadale was created by people from restaurants touchwood, barry, pillar of salt and hammer and tong (ahh it all makes sense). These distinguished foodie creatives have collaborated to execute these unimaginable dishes with confidence. Quirky and creative food that makes you go wow. 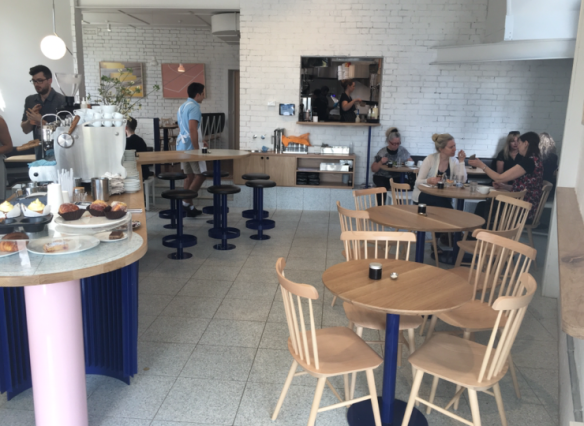 It’s bright inside with white brick walls, white hanging lights, light coloured wooden chairs and a few scattered artworks in pastels. It gives the atmosphere a cheerful and whimsical feel. The space is an odd shape, which is good for finding your own little space. 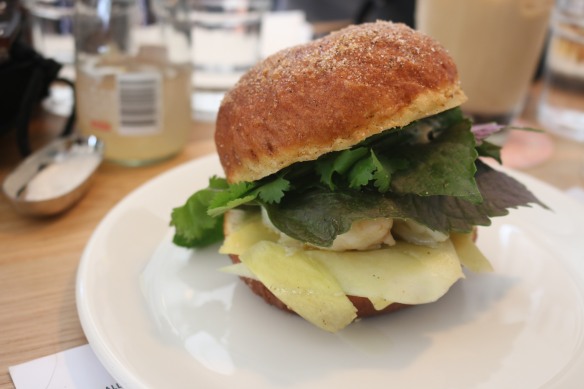 The lobster doughnut burger in its title holds a lot of curiosity. Could those three things co-exist on one plate and be delicious? I had to find out. And the verdict was…hellz yea they can. The doughnut was covered with salt and pepper (that totally looked like cinnamon sugar) and it was fluffy and soft in the middle but definitely more savoury of a doughnut than sweet. It was filled with big chunks of lobster with cucumber jam, sriracha mayo and some green mango and papaya slaw. A good combo of creamy and fresh.

The egg and bacon popcorn was a delight. It tasted like popcorn as you know it with egg yolk and crispy bacon on top. It was so good and they got the right balance of topping because the popcorn wasn’t soggy and still had it’s light popping corn crunch. They need to get this popcorn into all cinemas asap.

The coconut yoghurt custard was smooth and creamy and had a beautiful strawberry salad on top. It looked like a garden of strawberries, so pretty with fresh strawberries and strawberry gel, crunchy buckwheat clusters, wattle seed granola and young coconut pieces. Lots of healthy stuff that make for one tasty meal.

The benedict was interesting, not your traditional benedict. It was a sausage and egg blini with hollandaise, so good. Fried duck sausage with pickled onion a fried egg on a orange and corn blini (like a pikelet) and smoked maple hollandaise. Delish.

The eggs brulee were so cute with their little bruleed yolks. They were served with slithers of bread and butter pickled zucchini and crunchy bits of dried artichoke on seeded toast. Again not a combination I’ve ever seen before, but it works. 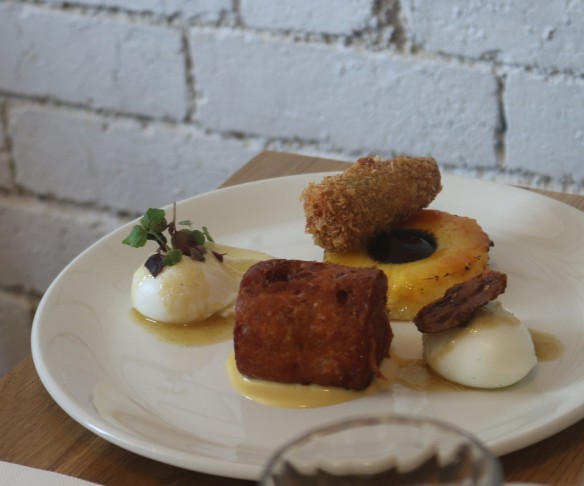 The North shore had little bits of different things that work well. It had a smokey ham hock hash, flame grilled pineapple, tobasco, a jalepeno popper and poached eggs. Tasty.

The Char spanner crab egg crepe was black and looked mysterious. It was filled with a bean shoot salad, water chestnuts and a scoop of lemon sorbet. Lots of fresh flavours. 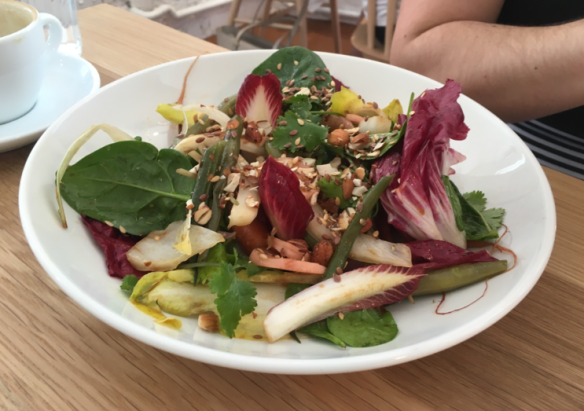 The chicken salad had lots of lovely fresh ingredients and various textures. There was spinach, green beans, radicchio, almonds and fresh coriander in a well-balanced zesty sweet lime dressing.

We had a gay ‘ol time with the Gaytime panna cotta. The toffee caramel panna cotta was incredibly smooth and creamy and was topped with popping candy chocolate, bits of honeycomb, biscuit pieces and a bit of gold leaf. It was a nice combination of textures.

I love a bit of creativity in the kitchen especially when they get it right. Mammoth is a great place to eat for breakfast or lunch and is especially good if you feel like something out of the ordinary and want to be inspired. Creative concepts executed well.