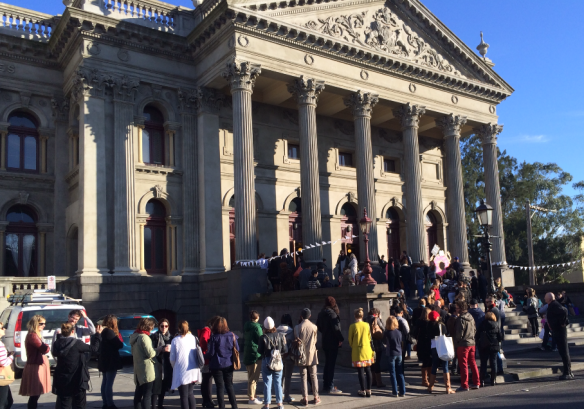 I enjoy a sleep-in as much as the next guy but when Melbourne’s emerging, new established, artisan and underground bakers come together for a winter bake sale, I’m there. The Flour Market was held at Fitzroy town hall this morning and there was an abundance of indulgent pastries, breads, cakes, pies, donuts and much much more.

We walked in and there were crates full of golden croissants. Agathe Patisserie had deliciously buttery croissants, plain and chocolate. They also had little brioche swirly buns with Nutella and custard meringue ones too. Yum!

There were some interesting truffles displayed by Citizen Cacao, which were raw, vegan and super tasty. They had a good sweet salty balance going on and some interesting flavours like berry coconut chia, orange and pistachio praline, chipotle, rosemary, salted caramel and almond butter. 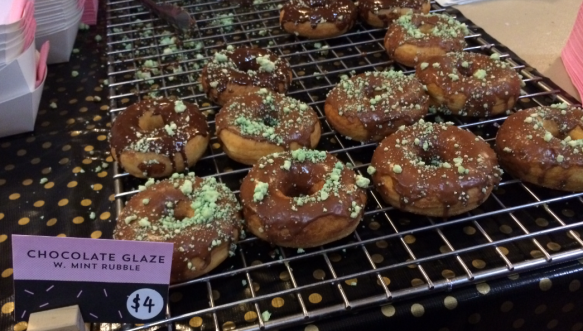 All Day Donuts had two types of donuts for sale, strawberry glaze w liquid cheesecake and chocolate glaze w mint rubble. Naturally we had to try both. They were both absolutely delicious!

When we took them home Max was onto it straight away. He was sniffing around for treasure. His nose knows when there are yummy treats in close vicinity.

Tivoli road had some impressive looking loves of bread and a range of sweet pastries.

They had croissants (plain, almond and chocolate) and danishes (pear, rhubarb and raisin and pistachio escargot).

They also had these cinnamon custard scrolls, which were really cinnamony and really delicious (one of my faves).

There were lots of little tarts made by Nora which had exciting flavours like lemon & lemongrass ginger brulee, coconut pandan, tamarind cream cheese strawberries, honey dark choc sea salt & sesame and quince espresso cream coconut caramel. We tried the brulee and the dark choc tarts, which were amazing.

Moonbeam kitchen had a range of cakes made from scratch. They had all different cakes, which were medium sized cakes (big enough to share if you’re feeling nice but also small enough to eat on your own). They had banana cake, apply country cake, a lemon loaf w cream cheese frosting, vegan chocolate cakes. They also had a range of flourless cakes, chocolate & raspberry and pear & almond.

They also had assorted cream biscuits like a fresh kingston cream bisciut and homemade oreos. 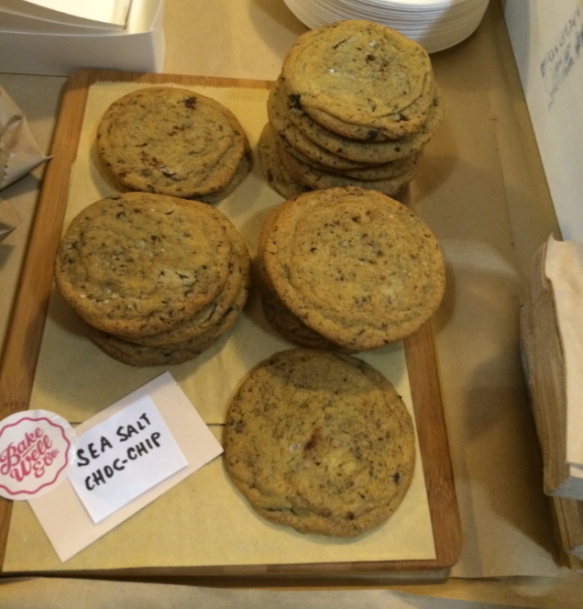 They also had these sea salt chic chop cookies which were delish.

There was a stall with a variety of donuts bursting with fillings. There was raspberry lychee & rose (the rose was delightful), peanut butter & jelly (I wanted more PB), salted caramel (OMG), lime curd and meringue and jaffa. The salted caramel one was so decadent. The caramel was so rich and salty it was delicious but tasted deadly. After each bite I needed a break. They also had the salted caramel in jars for sale.

Flour to the people

This guy. Flour to the people! Love it. There were also some other stalls with savoury food like Pure Pie (Love their beef, red wine rosemary pie), Pierogi Pierogi (I want to try these) and Shop Ramen (Their baos looked good) but this morning I had my eyes on only sweets. At Ed’s Breads they had a yummy potato and honey loaf and they were selling slices of their bread with grilled cheese. Yum grilled cheese! I just didn’t have enough hands or coordination to hold stuff and eat hot food at the same time.

We bought lots of yummy treats and it was a good thing I brought my bf because he makes a great pack mule and helped me carry all the stuff. We went to my mum’s house and had the family over for breakfast. A very sweet breakfast indeed. We toasted the Dr. Marty’s Crumpets at home and they were really yummy. They were really soft and fluffy when you bite into them.

Luckily we bought the early risers tickets (only $10), which allows you to enter the bake sale half an hour before it opens at 9am. When we left there was a huge line down the street so I was glad we went early. I had heaps of fun and have definitely eaten way more than my daily intake of sugar for the day. They have had a few Flour Market’s so far, so hopefully they continue these bake sales because they’re awesome!

I heart the Flour Market!