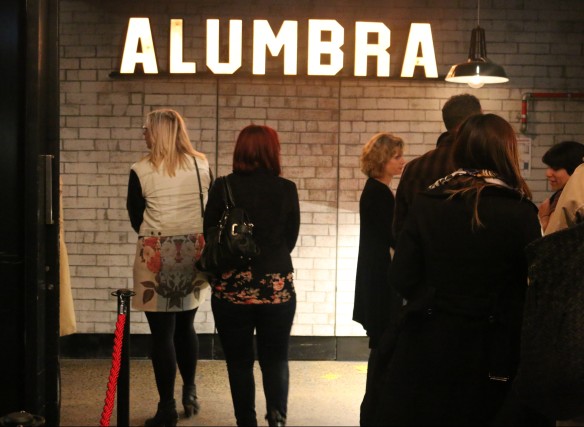 After a few intense months of renovating and redecorating, Alumbra have reopened and revealed their New York style deco. They have created a street art, industrial feel but kept the warm Alumbra vibes. But most importantly they have a New York street style menu created by the talented chef Daniel Wilson. Yep, the genius behind Huxtable and Huxtaburger. Let’s just say I know where I’ll be heading for Friday night drinks.

There was lots of beautiful cocktails and the moet was a flowing. A resident band of Alumbra played on the night and they were fantastic. 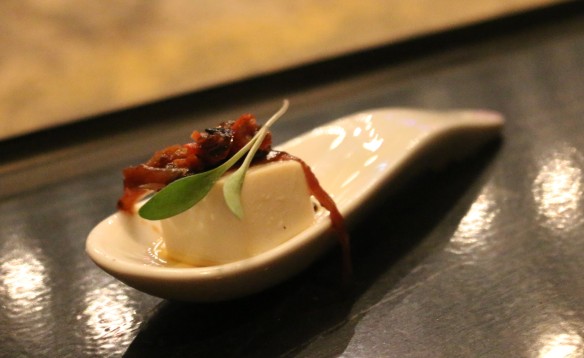 The steamed tofu was served on a wonton spoon and had a black bean & ginger dressing over the top. It had beautiful flavours and was a really delicate canape.

They had a little hot dog stand in the corner, which was cool. Just like the streets of new york aww. The big black dog is what they were called. They were franks in a charcoal bun with a lovely vodka & tomato relish topped with smoked cheddar. These looked fantastic and were delicious. 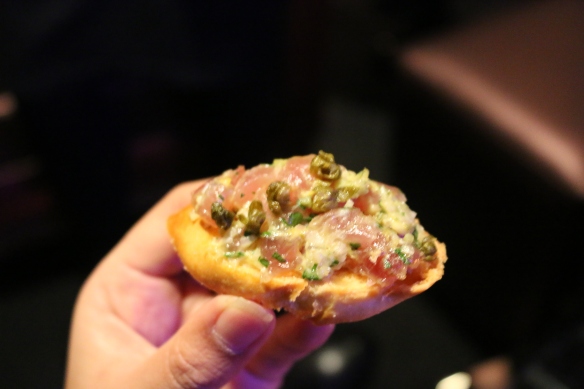 The tuna tartare was amazing. It was sitting on little charred sourdough crostinis and was topped with crispy capers. Loved them.

The Japanese fried chicken skewers were tasty, they had a light powdery batter and the meat was juicy and tender. It was topped with a yuzu mayo. Yum.

They had mini cheese burgers which if Huxtaburger is anything to go by they would have been amazing. And they were, according to everyone who ate them. I don’t know how this happened but I missed out on the burgers. Sigh. The above photo was taken by the folk of Alumbra. Where in the world was I? Then I remembered I spent a considerable time at the lite photobooth thing. Here’s is one of the many… http://thelite.co/38/3427 So I guess that solves the mystery.

The lamb ribs were incredible. The meat was falling off the bone. The ribs were sitting on tabouleh, which had a great balance of flavours and topped with subtly spicy harissa yoghurt. One of my faves. Delish!

There was a little bowl of crispy chickpeas, and soft roasted pumpkin, shanklish (sort of like goats cheese but made from cow or sheep milk) & za’atar. It was delightful. It was full of flavour and had lots of different textures. It was a delicious vegetarian dish.

The raspberry cheesecake was light and creamy and had a nice tartness from the berry. It was berrylicious.

The custard tart was smooth and had a citrus jelly with a bit of fancy gold leaf on top. Sort of reminded my of a lemon tart.

Definitely a great place to go for Friday night drinks. And they now have some extra spaces to hire for functions. On Fridays from 5-9pm they have chilled beats and a New York inspired street food menu created by the talented Daniel Wilson. Mini cheeseburgers yaaasss! Alumbra has always been a great club, but everything they did well just got better. New york style.

Note: Olive Sundays was invited as a guest to Alumbra.