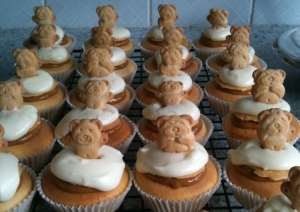 So I had this brilliant idea to make these magical cupcakes, that when you took a bite you were lifted into an unknown world of imagination, where you forgot who you were and who you wanted to be, and just for a moment were completely immersed in the wonders of the most wonderful buttery comfort that only an A-mazing cupcake could provide. You then open your eyes and the cupcake has been eaten with only the remnants of sponge crumbs on the front of your T-shirt. Oh my! What a cupcake indeed.

So I got a bakin’ and sure enough I had produced what I thought was a good reflection of my visualised concept. Hmmm where could these cupcakes of freedom make their debut? I pondered. It was my nieces first birthday party on Saturday. Perfect opportunity!

The enemy cupcakes were superior, they were basically sitting on stallion horses, wearing handcrafted amour with an ancient warriors blood sprinkled on top for decoration. My cupcakes were, well lets just say they were not as impressive in comparison. I watched as people took one glance at my cupcakes before being strayed away by the blinding light of the enemies edible glitter. I decided the guests were hypnotised by the cupcakes of betrayal at the time and meant no offence.

Sadly I took home five of the twelve made, which would have been a success had the cupcakes not been eaten by only my mum and dad who claimed they were the best cupcakes they’ve ever tasted.

It didn’t work out, sometimes it doesn’t, but it’s the vision of the magical cupcakes that counts right? My vision was strong, my failcakes were a stepping stone and im sure one day with determination and persistence I will no doubt make the cupcakes I envisioned.